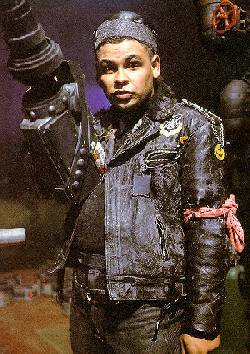 Origins : Found abandoned in a cardboard box under a pool table in a pub. Adopted, but father died : told that his father had gone to the same place as his goldfish. Later taken to child psychologist when found with his head down the bowl reading him the football results.

Skills : Believes himself to be Ace pool player and Great guitar player. Has written The Indling Song and the definitive Om.

Musical Tastes : Rasta Billy Skank (contains the warning May cause disorders of the nervous system and bowels). First song learned to play on guitar : She’s Out Of My Life.

Heroes : Jim Bexley Speed (Roof attack player with the London Jets). Also has a high regard for Ace Rimmer.

Ambitions : Get back to Earth, marry Kristine Kotchanski and buy a farm on Fiji where they will breed horses, cows and sheep. Also has hopes of opening a chain of Hot Dog and Doughnut Diners.