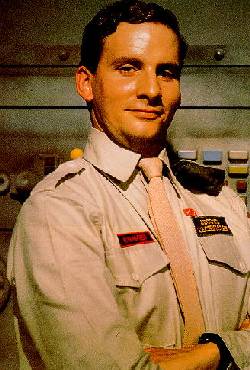 Species : Of human origin; hologram since radiation leak. Now has a light bee that can give him limited hard light status, allowing him to touch things.

Marital Status : Single (unless you count Rubber Rachel who unfortunately has a puncture)

Origins : Born on Io, one of Jupiter’s moons. Refers to mother as a Bitch queen from hell; father used to put Rimmer and his brothers on a rack to make them tall enough to enter the Space Corps Academy.

Education : Sent to Io House (unlike his brothers. Blames his not becoming an officer upon this fact) Also attended Cadet School.

Further Education : Maintenance course at Saturn Tech. Has been trying for years to learn Esperanto.

Skills : Disciplined, organised, dedicated to his career. Always has a pen.

Ambitions : To get a body, to get back to Earth, and to find a woman who doesn’t want to vomit over him in disgust. His most burning ambition is to become an officer.