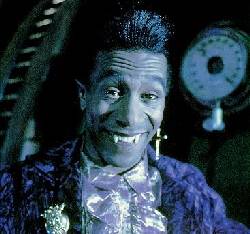 Origins : Lister’s cat Frankenstein. Evolved in cargo hold over 3 million years. Parents thought to be a cripple and an idiot, as they were the only cats left aboard after the Cat Wars.

Education : Instructed in the Seven Cat Commandments. Learned of the Holy Mother, Frankenstein, and the true father of Catkind, Cloister (or Clister) the Stupid who would return to lead them to the Promised Land of Fuchal. Was also taught how to read cat style by sniffing the blank pages of cat books.

Further Education : Rimmer taught him how to operate the vending machines on Red Dwarf as a bribe to hand over Lister’s cigarettes. Can also pilot Starbug.

Skills : Looking good, eating and sleeping. He has recently developed his nasal abilities to a very high standard.

Musical Tastes : ‘Tongue tied’ (once dreamed that he was singing it accompanied by the rest of the crew on backing vocals). A twisted tape of ‘Robert Hardy reads "Tess of the D’urbervilles"’.

Alter Egos : Duane Dibbley (Duke of Dork), The Riviera Kid and a Priest in Ace’s reality.

Ambitions : To have sex with anything that smells better than Lister.